PHILIPSBURG (May 3rd , 2018) — It’s unfortunate for the Philipsburg Jubilee Library to announce that unknown person (s) for reasoning only known to themselves tried to vandalize and break- in to the Library over the carnival holidays.
The vandalism and failed attempt to break in left the staff flabbergasted on Wednesday May 2nd, 2018 just before opening hours, causing the library to open one hour past scheduled time to their loyal patrons. Shattered glass and stones could be found near the created temporary Children’s Non –Fiction Collection and partway to the garden….NOTICE FOR CLOSING HOURS…. Read More
http://bit.ly/2FEDh5v 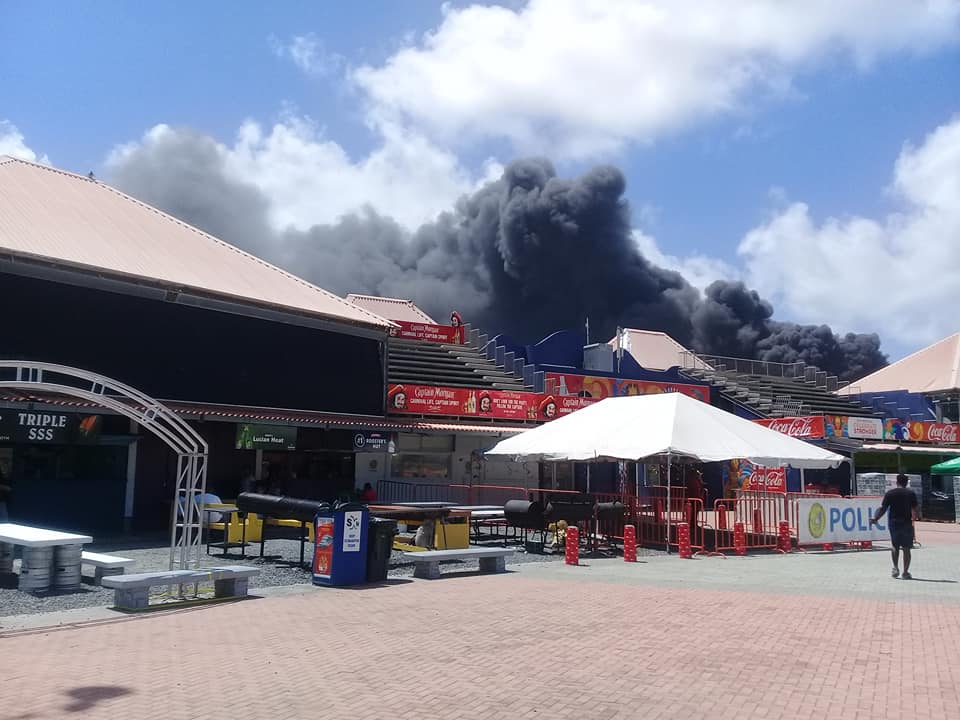 April 13, 2018 – Philipsburg – Seems like carnival 2018 started off in flames today ! Authorities from the fire department and SCDF, sent out a notice via security to all booth holders to close their doors … Read More
http://bit.ly/2quvNfL

With the attention of the world now on the recent mass kidnapping of more than 200 Nigerian teenage girls, our St. Maarten queens are taking a stand …
http://bit.ly/1oSe6S9

Carnival 2014 was off the chains this year, below you can get a glimpse of the nights of carnival 2014 compliments of More Bachanal , Where The Flex and Judith Roumou. Stay posted to http://www.ilaindvibez for more carnival photos and update on Sxm Artist, Music Entertainment and News Updates…
http://bit.ly/1sLgaKZ

Such a unique photo we had to share it.

St. Maarten – Somebody came up with what turned out to be a bright idea to print a few t-shirts with the words, ‘ SHIP HAPPENS, Carnival Dream 2013, St Maarten.’ The two visitors proudly agreed to pose for our cameras on the Board Walk. In the background is the Carnival Dream. Something like this could only happen on a friendly island.

( TODAY) St. Maarten – While there is no question Carnival Cruise Lines’ image has been stained among the public at large by recent malfunctions on its ships, cruise sellers said last week that its reputation remains solid among experienced cruisers. On March 13, the Carnival Dream got stuck in St. Maarten because of a malfunctioning emergency generator. Thousands of cruise passengers had to be airlifted back home. It was not the only incident that shook the cruise world.

Cruise sellers told Travel Weekly reporter Tom Stieghorst that consumers who have never before cruised are growing more leery of cruising in general following a series of incidents on Carnival ships, several of which were widely sensationalized by 24-hour TV news channels.

Last month the Carnival Triumph was the center of drama at sea when an engine fire paralyzed the vessel that carried 4,200 passengers. They were stranded for five days at sea. The Triumph is currently undergoing a remake and will return to service on June 3. Ten cruises have been canceled. Desperate to satisfy affected customers, Carnival is offering full refunds, reimbursement for non-refundable transportation costs and a 25 percent discount on a future 4 to 5 day cruise.

Yesterday there was more cruise upheaval: Royal Caribbean’s Enchantment of the Seas, on a seven-night trip to Florida and the Bahamas, was forced to return to Baltimore after the suspicious death of a 62-year-old passenger. The FBI interrogated the woman’s husband.

“All this makes people who have not sailed before more fearful of sailing,” said Karen Gurley, of Athena Travel in Laurel, Maryland.

To mend a hole in bookings that opened after the Carnival Triumph incident, Carnival is offering promotions, including a “Friends and Family” discount of up to $600.

Carnival wasted no time implementing the safety enhancements. It has scrubbed 10 additional cruises on the Carnival Triumph, and the first two cruises of its newly remodeled ship, the Carnival Sunshine, keeping them in dry-dock longer to add more redundant safety features.

A string of glitches that, independent of each other, might seem minor has instead evolved into a public relations challenge for Carnival as it seeks to weather recent hits to its reputation and emerge in calmer seas.

Its difficulties started with the Feb. 10 engine room fire that disabled Carnival Triumph. Then, a balky emergency generator on Carnival Dream resulted in that ship ending a cruise prematurely in St. Maarten.

As Dream passengers were flown home, reports of minor propulsion and steering problems on Carnival Legend and Elation raised reliability questions that were fueled by hyperactive media coverage.

In the same call, Carnival Corp. Chairman Micky Arison sought to put the run in perspective, both in numbers and guest satisfaction.

Frank said a review of 10 years of incidents revealed that the number involving Carnival Corp. brands was no greater than the worldwide fleet average. But he added that since the 2012 Costa Concordia accident, it has been “a little bit higher.”

Carnival’s business suffered at least a temporary setback as a result of the series of incidents.

Arison said there was a double-digit decline in bookings immediately after the Triumph fire. But there were few cancellations, and price promotions have worked to restore interest.

“Price always makes a difference,” said Heather Morris, owner of Onderland Travel, in Lancaster, Philadelphia. “If people believe they’re going to get an excellent deal, people will choose to go.”

Still, Morris said some travelers who haven’t cruised before “adamantly refuse” to consider it. “They will not do it,” she said, adding that she suggests all-inclusive resorts to them as an alternative.

Kyle Miller, a Cruise One agent in North Little Rock, Arkansas, agreed it is people unfamiliar with cruising who are spooked by the incidents.

“People keep hearing, ‘Oh, another one’s happened,’ and they don’t understand it’s not the same thing that happened on the Triumph,” Miller said. “They’re completely minor issues that shouldn’t even be on the news and ordinarily wouldn’t be.”

Miller said only one customer had called to cancel, though she added, “It’s hard to know if there were people who didn’t call at all because of this, but overall we’re still getting bookings. We’re still fairly busy.”

Carnival launched its Friends and Family promotion on March 18 to help persuade reluctant cruisers. The sailings are mostly close-in dates, with sample fares ranging from $249 for an interior cabin on a four-night cruise from Tampa departing April 11 to $929 for a balcony on an eight-day Carnival Breeze sailing from Miami in late May.

Several agents said the offers are lighting up the phones, but they’re coming more from previously booked guests seeking a match than from new customers.

Jill LaBarre, of Cruise Brothers in Orlando, said she spent four hours on the phone with Carnival one day trying to rebook clients at lower prices. Although one got a substantial price reduction, others were offered small upgrades. In one case, they were offered an upgrade from interior to ocean view cabins, but at $40 more per person, LaBarre said.

The clients had been anticipating a lower price or equivalent onboard spending credits.

LaBarre was most upset about the 90 minutes she spent on hold waiting to talk to a Carnival representative. “I’m spending all my time and making less money for it when I could be doing other things for my business,” she said.

Carnival has not said how much the price promotions would reduce earnings, but Arison said the promotions are no greater than the reductions it made last year.

Even so, both Moody’s Investors Service and Standard & Poor’s revised the ratings outlook on Carnival Corp. to negative, citing the potential for lower yields and higher costs as ships get upgrades after the Triumph fire.

If ratings on Carnival Corp.’s debt are lowered, it could raise the company’s cost to borrow money.

Carnival is already signing contracts to improve the Triumph and Sunshine ships. It has identified three areas it will improve: fire prevention, detection and suppression; redundancies in operations; and a wider scope of hotel services that can be run from emergency power.

The Carnival Triumph, already being repaired in Mobile, Alabama after its engine room fire, had been scheduled to resume sailing April 13 but will now stay in dry-dock until early June to get the new upgrades.

The Carnival Sunshine, the former Carnival Destiny, is at the Fincantieri shipyard in northern Italy, where its 49-day dry-dock has been extended to add the new safety features to the list of improvements it was already getting.

Scheduled to emerge in mid-April, the Carnival Sunshine will now make the first of its nine- and 12-day Mediterranean sailings on May 5.

Carnival said the sourcing of supplies and scheduling of improvements will take less time for the other ships in its fleet because the company will have greater familiarity with the process.

It expects to take each of its ships out of service sometime in 2013 or 2014 for improvements that emerge from reviewing the Carnival Triumph experience. It has a capital improvements budget of $800 million for refurbishment and maintenance in 2013 but isn’t saying how much of that will go toward fleet-wide safety upgrades.

“Hopefully, in the next couple of weeks, we’ll have a full plan with estimated costs to doing all this work,” Frank told analysts. “I don’t see it as being enormous, but it will be some amount of money.”